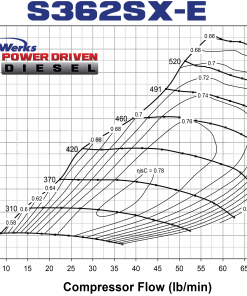 The Borg Warner SXE turbo line introduces the latest in turbo technology. With a new/redesigned compressor housing and a Forge Milled Compressor wheel (FMW), the SX-E turbos not only outflow their SX3/4 counterparts by a substantial amount, but they spool faster and come standard with a 360° thrust-bearing, allowing them to last longer and run higher power levels. Get the most out of your truck and be ahead of the competition with a Borg Warner SX-E turbo.